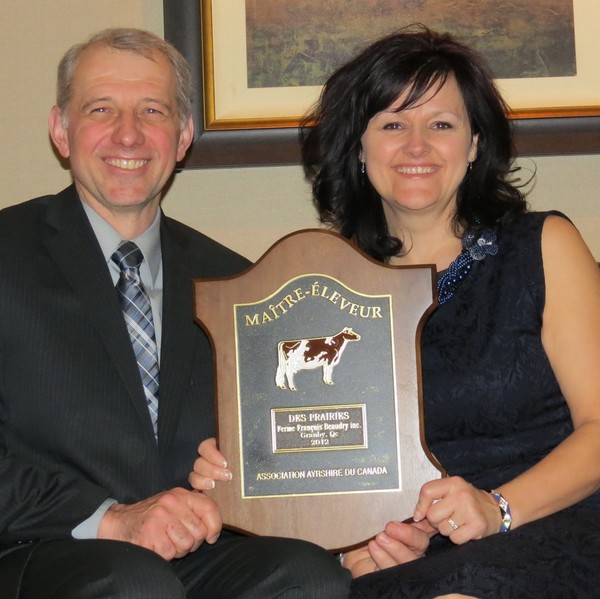 Our next recipient is being awarded his second Master Breeder Award.  François Beaudry partnered with his father Roger in 1981. He represents the fourth generation to work on the farm, which is located in Granby, Québec. François’s partner, Hélène Tremblay, was also raised on an Ayrshire farm – the Ben Ferme Herd – in Hébertville in the Lac-St-Jean region. Since 1988, Hélène has been co-owner of the farm and she is very involved in the various tasks related to the business. The farm was incorporated under the name of Ferme François Beaudry Inc. in 1992.  In addition to François and Hélène, a fulltime employee completes the team. Hélène and François have four children: Mylène, Marie-Pier, Philip, and Carol-Anne. Though they are not all living at home, the children all give a much-appreciated hand during the busy months and at agricultural fairs. The farm covers 160 acres, where hay and corn silage are cultivated. The herd consists currently of 120 animals, including 56 milking cows, and the milk production average reaches 9,170 kg with 4.3% fat and 3.4% protein, for a BCA of 261-275-269. The most recent classification reveals 4 EX, 31 VG, 24 GP, and 6 G. At Ferme Des Prairies Farm, they always aim for balance between conformation and production. They want to milk functional, durable, productive, and healthy cows. Their sires’ selection process is reflective of this philosophy. Embryo transfer is regularly used to exploit the potential of the herd’s best animals to the maximum. Among the animals having contributed the greatest to this Master Breeder Award is Des Prairies Prudam EX 91-3E 10*, a cow who had an undeniable impact on the Des Prairies Herd but also on the Ayrshire breed in general. She is an exceptional cow and a star within the breed, thanks to her numerous daughters and grand-daughters. It is not surprising that Prudam was awarded the title of Ayrshire Dream Cow in 2008. Prudam’s progeny stands out as much in conformation as in production. Prudam’s dam, Des Prairies Prudel EX-3E-91 6*, also contributed many points by means of her good lifetime production of 64,575 kg of milk in 6 lactations, with 4.95% fat and 3.52% protein. Des Prairies Xanty VG-89 with a lifetime production of 86,234 kg and Des Prairies Cassy EX-3E-90 with 60,312 kg are among some of the other cows who contributed to this honour. For many years now, the prefix Des Prairies has been synonymous of success in the exhibition rings. Let us recall, in particular, Des Prairies Patsy VG-88 who was Grand Champion at the 2011 International Dairy Showcase. To list all prizes won by the Herd would take too long, but let us say only that it has received over the years a great deal of All-Canadian, Reserve All-Canadian, and Nominations. Production-wise, Des Prairies Prada VG-87 was the best producer in the Junior 3 Year Old Class in Canada in 2011. Year after year, the Herd always ranks among the best in production in the country, having even earned in 2009 the Highest Average in the 50-64 Records’ category. François has been a Member of the Ayrshire Canada’s Breed Improvement Committee for several years, where his honest and specific opinion and his good judgement are always appreciated and respected. In addition, he is the Director of the Bedford-St-Hyacinthe Ayrshire Club, and he has also been acting as official judge for several years. He has been judge at almost all Québec exhibitions, including the Expo-Québec and the International Dairy Showcase in St-Hyacinthe, and he has also had the chance of judging in Ontario and the Maritimes. Internationally, he has judged in Finland, Colombia, South Africa, and the United States. The Des Prairies Herd is known world-wide; embryos from the Herd’s best cows have been sold in many countries. François and Hélène are always happy to receive guests, they are exceptional hosts. They also never hesitate to consign quality animals at the various Ayrshire sales. For Hélène and François, receiving the Master Breeder Award is one more reason to appreciate their Ayrshire but it is foremost a great motivation to continue breeding animals of the highest quality in terms of production and conformation to maintain a sustainable business, without losing sight of the quality of life with family and friends. In the future, there are no major project planned, but the main goal is to continue improving and consolidating the business. The objective of breeding many more show and production champions is obviously always present.  Working toward obtaining a third Master Breeder Award is undeniably another one of Hélène and François’ goals. Ayrshire Canada offers its most sincere congratulations to the Ferme François Beaudry Inc. Farm for its Master Breeder Award.