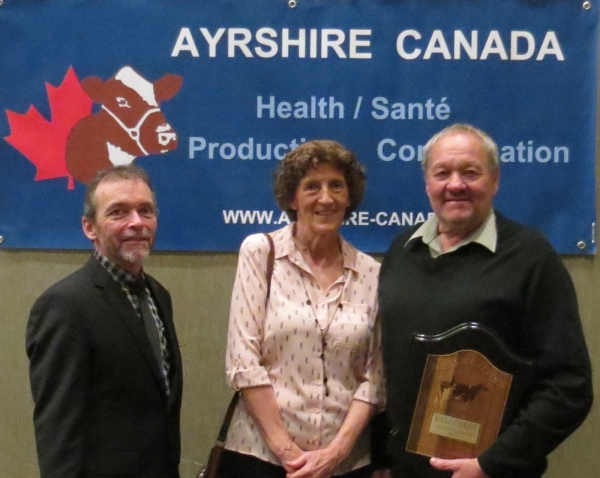 Kellcrest, one of the most recognized prefix in the Ayrshire World, has won its 4th Master Breeder Award. Synonymous with production, longevity, conformation and, especially, some of the best cow families ever known in Ayrshire history, like the most renowned one: Kellcrest Happy Spirit EX-93-8E 9* who produced nearly 140,000 kg in her lifetime. The McKells of Tullochgorum Road are from Howick, QC. The first generation was Whiteford and Jennie McKell and family who purchased the farm in the 30’s and started the Kellcrest prefix. Allan, 2nd generation, joined the operation in 1971 and his brother Danny, in 1981. Now the 3rd generation and 4th generation are operating the farms. Kevin and Christina, with 4 children, are taking over with new challenges, trying to find more choices to breed for their type of animals and also new ideas, including a new robot barn and calf facilities for 2018. Kellcrest has their genetics in every country in the world that has Ayrshire cattle, with the sale of animals, embryos, and semen. The latest venture was selling a bull to Russia for their breeding program. How the McKells have won so many escalades, they think, is that in the past their father Whiteford did not like the low-set Scottish-type cow that a few breeders were importing and then selling their bulls. So he went to the USA to purchase bulls from some of their best cow families available. This resulted in extremely tall, deep-bodied, dairy animals with the ability to milk. Allan and Danny continued this breeding philosophy by not listening to a few people who think that their judgement is best for your herd. By using their own ideas, Kellcrest has won more production and lifetime awards than any Ayrshire herd in Canada. Over the years, they have proven more bulls from their cow families than any other breeders as well. They have also had lots of fun and excitement at the shows by having champions at local shows as well as Expo-Québec, Spring Show, RAWF, and Madison. By promoting the Ayrshire breed at the shows with their kiosque and head board, they met and became friends with many interested breeders from all over the world. Listing the amount of awards Kellcrest has won and naming some of their famous cows and bulls would take just a little too long to mention here tonight. The number of points accumulated for this year’s award was spectacular. Cows like Kellcrest Casper EX-92-7E 9*, Kellcrest Shakira EX-91-4E 5*, Kellcrest Fenella EX-92-7E 2*, Kellcrest Miracle EX-4E 2*, Kellcrest Happy EX-94-2E 8*, Kellcrest Porsche EX-2E 4*, and Kellcrest Tia EX-91-5E 5* highly contributed to obtain the title. That really shows the great depth of this tremendous breeding faculty. 85% of the points came from North American genetics animals.   Kellcrest has really accomplished this achievement by doing it their way. Ayrshire Canada sincerely congratulates the McKell Family from Kellcrest Farms Ltd for their 4th Master Breeder Award.