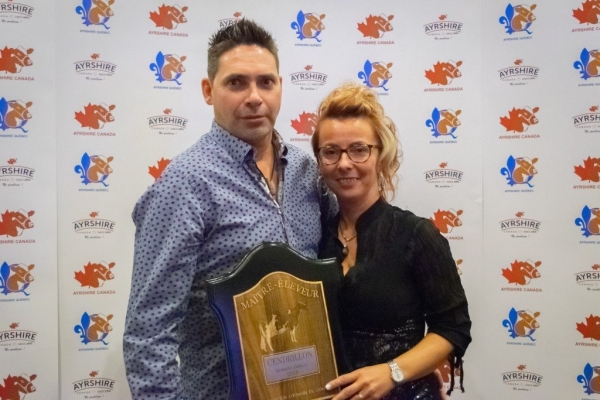 Within the Saguenay-Lac-St-Jean Ayrshire Club, the CENDRILLON prefix is synonymous with show success, having won several Grand Champion and Reserve Grand Champion titles as well as numerous Junior and Senior Banners.

Roberto Dufour acquired the farm from his father, Jacques, in 2003, becoming the fourth generation. The farm then held a quota of 26.64 kg/day. Soon after the purchase, important building works were completed to improve both the ease of working and animal comfort. One of the previously existing farm buildings was completely redesigned. Then, a cow barn – bought from a producer who had recently sold his quota – was moved, achieving as such their project goal of milking 59 cows.

Love and passion for genetics are the main sources of motivation for their daily work. More than 27 Excellent cows have been bred at the farm. Cendrillon Tomahawk Ghislaine EX-92 6* received the highest score. Another favorite is Cendrillon Kellybuck Manda EX-90 2*, who truly distinguished herself in 2011 by winning the Reserve Champion trophy in St-Félicien, in addition to her All-Canadian nomination and her participation as “cover girl” in the Ayrshire Review. Manda is the first of three Excellent generations. Their biggest pride is undoubtedly having bred Cendrillon Ankazou Talma VG-88 at 2 years of age. In 2012, this cow won the Senior 2-Year-Old class at the Royal, and was the All-Québec and All-Canadian winner. At the age of 2 years and 8 months, Talma produced 8,822 kg of milk at 4.2% fat and 3.6% protein, with a BCA of 283-285-309. Roberto will never forget this exceptional cow. Talma’s dam, Cendrillon Ripken Taline EX-90 2*, has been a very good brood cow, as Talma’s two sisters Cendrillon Normandin Line and Cendrillon Piékouagami Talina are respectively EX-90 1* and EX-91 3E. From this same family, Cendrillon T-Bruno Rubis GP-84 has produced 80,000 kg in 8 lactations. Several other cows have also greatly contributed to obtaining this Master Breeder Award, among others: Cendrillon Ripken Cindianna VG-88, Cendrillon Nolan Abelle VG-88, and Cendrillon Orraryd Indienne VG-87.

In 2015, to plan for the next generation and to further improve dairy performance, another renovation project was undertaken. A greater level of comfort was brought to the existing stalls, a new free stall was built for dry cows, and the covered manure pit was transformed into a free-stalled barn for heifer calves. Thanks to this new investment, it is now possible to milk 85 cows.

Jacques gave a lot of his time to the farm up until last year. At the age of 80, he now enjoys a well-earned retirement. The farm now relies on the help of Francis, who is surrounded by a solid support team made of Jean-François, Olivier, and Étienne, the latest recruit, all of whom are contributing of the business’ success. Roberto’s partner, Mélanie, works for her part as an expert consultant for Nutrinor Agriculture and is responsible mainly for the herd’s feeding program, in addition to a few other tasks.