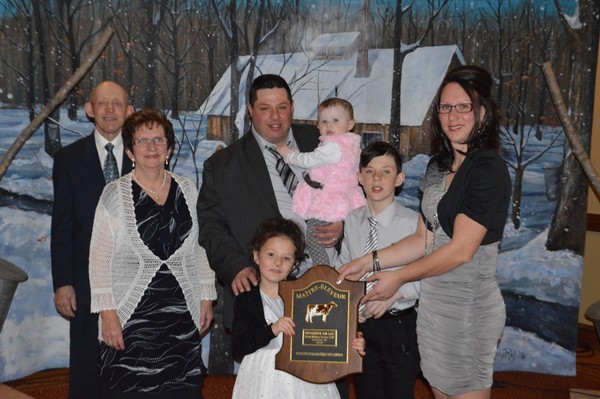 Located on the shore of the Grand lac St-François Lake in Lambton, the farm sits at the limits of the Estrie and Beauce regions, in the province of Québec.  It first began in 1930 under Philippe Richard, who took over a long-abandoned farm. Only in 1969 did Yves Richard, along with his spouse Denise Isabel, buy the family farm. They named it “Ferme Bellevue du Lac”, quite obviously after its enchanting site. In 1972, they bought their first pure-bred Ayrshire animals.  Their objective was very well-defined; that is, to breed a 100% pure-bred Ayrshire herd and increase its genetic value, both in conformation and production. Over the years, the herd gained in strength. With a taste for competition and genetics, they entered the world of Shows in 1979. From then on, with the innovative purchase of some very good heifers, things happened very quickly. Their best purchase was, undoubtedly and most certainly, “Vue St-Honoré CP Xelle”, who was only 3 months of age. Then, thanks to embryo transfer, they succeeded in breeding a very good family, who still represents today more than 50% of the current herd. Yves and Denise passed their passion on for breeding quality Ayrshires to their 4 children. 2000 was a landmark year for the Farm, with Denise and Yves officially partnering with their youngest daughter Martine and her husband Steve Lacroix. After Martine and Steve both obtained their Attestation of Collegial Studies (ACS) the 2nd and 3rd generations finally came together on the family farm. A massive expansion of their quota, land, and machinery became necessary to ensure the viability of this 4-partner business. As such, in 2004, they purchased quota, completely renovated the farm’s interior, thus maximising the dairy cows’ well-being, and built a cold bedded pack barn to raise their heifers. In the spring of 2010, the production of maple syrup was added to diversify the business, thanks to the start-up quota they received in 2009.  In 2011, they renovated and expanded the family house to create a bi-generational home, thus enabling Yves and Denise to remain in their little piece of paradise for a well-earned retirement, while continuing to help, work, and be involved within the business, as their love for farming is still very much alive. Next to occur, in 2014, were the construction of a feeding room, the modification of the heifer barn into a free-stall one with scrapers, and the installation of rails for the milking machines. The dairy farm currently has 110 head of Ayrshire cattle, of which 46 are in lactation and producing an average of 55 kg daily, for an average of 8,353 kg with 4.2% fat and 3.4% protein under milk recording with a BCA of 243-249-249. The farm covers an area of 514 acres, of which 287 are cultivated (124 are leased), 127 are wooded, and 100 constitute the maple grove. Renowned across the entire province for their 100%-Ayrshire herd’s performances, the Farm currently counts 7 cows classified EX at the farm, including 5 multiple ones, 20 VG, 21 GP, and 4 G. The passion for shows has been passed on, and is still as vibrant. Their exhibit’s performances, especially last season, in over more than 9 shows, but more recently in Victoriaville, Montmagny, St-Hyacinthe, and Toronto, have made even more well known the quality of their herd, along with the sale of many animals at the Elite Spring Sale. Since then, many of them have stood out, starting with the famous “Vue St-Honoré CP Xelle” VG 89, the herd’s founding cow, a 7-Star Brood Cow who obtained the 1stProduction Certificate for 100,000+ kg of milk, with 100,998 kg in 10 lactations. Then came her daughter, “Bellevue du Lac Bk Miss Xelle” EX 94 7E 3 Stars, who obtained the 2nd certificate with a lifetime production of 102,908 kg of milk. Very famous in the show rings at the beginning of the 2000s, with 1 All-Québec and 1 All-Canadian Nomination and - the cherry on top of the sundae - crowned “2010 Dream Cow” by Ayrshire Québec. Then also came her daughter “Pardner Misty” VG 88 3 Stars, currently in her 10th lactation and who has already surpassed 98,360 kg in 142 days, and her daughter “Mistigry” EX 90 4E, who is now at approximately 75,000 kg. Their objective, very realistic as we can see, is taking shape to obtain 4 Certificates for lifetime productions of 100,000+ kg over 4 consecutive generations. Additionally, there are currently 5 active generations in the herd.  But let’s not forget the more recent performances of “Anabel, Val, Karamel, Idole, Extra, Kate 1, Kayla, Bégonie, and Misbyna”. Over the years, the Farm has won 7 All-Canadian Nominations, 9 All-Québec Nominations, and 3 All-Québec “Jeunes Ruraux”, 2 Certificates for 100,000+kg, 3 for 90,000 kg, 3 for 80,000 kg, 4 for 70,000 kg, and 7 for 60,000 kg of milk, 18 cows have been classified EXCELLENT at the farm, including 17 bearing our prefix, and 36 Brood Cow Stars have been received. We are very grateful for what Yves and Denise, the previous generation, first accomplished. And now, Martine and Steve are enjoying the opportunity they were given and continue to work hard so it may all continue for a very long time. They hope that the next generation, composed of Alexandre, 9, Élisabeth, 6, and Anabelle, 16 months old, will also be “bitten” by the farming bug, as previously expressed at the “Journées des Jeunes Ruraux”. For the Ferme Bellevue du Lac’s breeders, obtaining their first Master Breeder Award is the completion and ultimate reward for their high-quality breeding, based on longevity and performances. It is with great pride and heightened emotions that they are receiving, all 4 of them together – Denise, Yves, Martine, and Steve –, this grand Honour, the result of their excellent hard work and accomplishments. Already, they are harbouring the hope of another one… Ayrshire Canada offers its most sincere congratulations to Ferme Bellevue Du Lac for its Master Breeder Award.