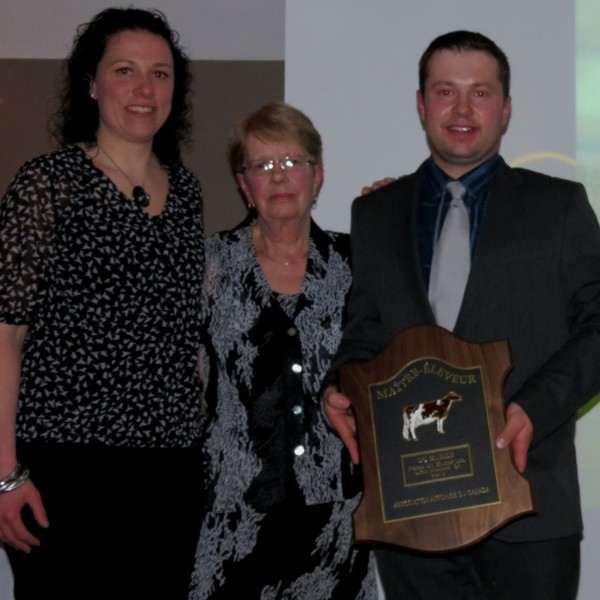 The Ferme Du Murier’s history goes back to 1947 when Fernand Soucy purchased his first farm covering a land area of 90 acres. The herd was then composed of about fifteen pure-bred Ayrshires. This was the beginning of their passion for the Ayrshire breed: the spell had been cast. Thirty years later in 1977, Alain, Fernand’s oldest son, became a partner in the business. A few years later, his brother Charles joined them and became responsible for the pig farm, which is well known for the quality of their high genetic potential pigs. Numerous overseas travels have allowed their pigs to become very famous. In 1983, the business acquired another farm which covered a land area of 243 acres and was comprised of barns and quota.  This resulted in the doubling of the land area and quota. In the 1990s, efforts were concentrated toward renovating the barns to bring them up to date and ensure the well-being of the animals. In the early 2000s, Bruno, Alain’s younger son, also became a partner in the business. The focus was then put on automation, with a single goal: efficiency. Silos were added and a mixer was purchased. On the pig farm side, the maternity unit was let go and efforts were focused rather on the feeder hog operation. As such, major modifications took place to optimize the operations and reduce the workload. Fertilization via embryo transfers was also put forward. Their goal was to reach a perfect balance between type and production. Presently, the farm cultivates 500 acres where corn, wheat, soy, and hay are grown. The 130-head Ayrshire herd currently counts 54 cows in lactation with a quota of 60 kilos. The production average is 8,105 kilos, with 4.48% fat and 3.36% protein and a BCA of 244-265-249. The herd is classified as such: 2 EX, 31 VG, 28 GP, and 3 G. Their passion for shows is not new. Already in the 60s, the Ferme Du Murier had stood out at several shows. Fernand acquired his passion for shows early on, which he was able to pass on to future generations. A few animals made a lasting impression, most notably Blackaddar Simone (Junior Reserve Champion RAWF 1987 and All-Canadian), Lagacé BBK Blanka (Honorary Mention RAWF 2002, All-Canadian), Du Murier BBK Blackrose (Honorary Mention IDS 2003, All-Canadian Nomination), Du Murier Ice Emma (Junior Champion Expo-Québec and Honorary Mention RAWF 2004), Du Murier Lipton (Honorary Mention IDS 2008), and Aurel Poker Pansy (1stRAWF 2013 and All-Canadian). Du Murier Chanel and her progeny also had a major role in the awarding of this Master Breeder Award. Classified EX 90 3E 4*, she had several daughters who also contributed to a great number of points, particularly Du Murier Chalou EX 90 and Du Murier Charivari VG 88. They were Reserve All-Canadian Progeny of Dam in 2012. Chanel remains to this day the best brood cow of the herd and still has 2 very promising heifers in the barn. Their best purchase ever was, without a doubt, Faucher Harmony Debby EX 91 5*. Since her acquisition in 2007, she has already had 7 daughters VG, who also contributed several precious points toward this prestigious Award. The Soucy Family was and still is very involved in its community. It first started in the 50s with hosting social evenings in the barn. Then came municipal politics. Today, their involvement extends to various committees within the Ayrshire breed as well as to hosting events, such as the Picnic or animals sales. It is with great enthusiasm that they devoted – and still do –countless hours to their community. This Award is the fulfillment of a dream, made possible by the hard work of three generations of Ayrshire enthusiasts. Sadly, Alain, who proudly represented the 2nd generation, lost his battle with cancer earlier this month. Alain, know that this Award, tonight, is for you. Great comfort is found in the budding 4th generation, already demonstrating a great deal of passion. Such a passion can take one really far and this is why the future is promising. Great passions can lead to a lifetime of happiness.