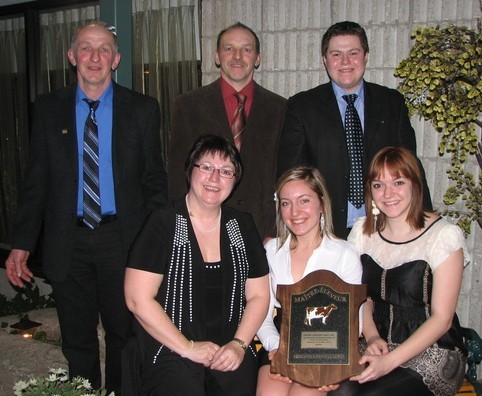 Our next Master Breeder is particularly proud of this title that represents the ultimate outcome, the fruit of their labour in the business and especially their breeding for over 30 years. As they say so well: “Perseverance each year to improve the herd step by step has no price.” The Chaluka herd has approximately 57 cows in milk, for a production average of 7484kg of milk with 4,1% fat and 3,3% protein for a BAC of 214-214-216. The herd classification is of 3 EX, 16 VG, 21 GP and 13 G. Lucien Charest bought the Farm 1952 and decided to give it prefix Chaluka for Charest, Lucien and Kamouraska. The Ayrshire herd at the time was crossed and remained that way for 27 years. On April 30, 1979, his two sons Alain and André bought the farm and decided to invest in the future of their breeding. Three new cows were purchased in the fall at an auction in Rimouski; Jovette de Guimond, Mireille de Guimond and Kayfier des Flots Bleus. Since then, when they had the chance, they never hesitated to invest in new cow families, as they did in 1992 with De St Pierre Zenica, EX 90 4E 3*. It was a good purchase because a few years later she was the first EX cow of the herd, she distinguished herself in 1995 when she was Grand Champion at the St-Pascal Exhibition and Reserve Tout-Quebec that same year. Today, her descendents represent about 25% of the herd. Money was also invested in some embryos, such as De La Chaudière Starlette, EX 90 2E 4* with Willy. It was a stroke of luck because that embryo, Embryo-Star Willy Delicate, BP 83 3*, gave birth a few years later to Chaluka Dropstad Kedali EX 90 4* who is now the pride of the farm, mostly for the temperament she transmitted to her daughters. According to her owners, she represents balance between conformation and production. With her 4 Stars, she also shows her breeding capacity. Two of her daughters by Ice Man are VG, Neuronne VG 88 and Romance, VG 87; two of her sons are in artificial insemination at Semex. Their last purchase was Lagace BB Blandie, VG 88, who now has 2 beautiful calves at the farm and will surely have more! Presently the two owners are Alain and André but the successors are very active. In fact, André’s four children are present at the farm, each in their own way. The oldest, Jean-Philippe, looks after exhibitions and works for various exhibitors throughout the world. He will be returning to the farm in the near future. His brother, Mathieu, is presently studying to be an accountant but helped at the farm when he was still in secondary. Their only sister, Arianne, is more and more involved in the business, despite her studies in communications. Their youngest brother, Pierre-Luc, is in secondary school at the moment, but also helps at the farm. In 1994, André and Alain decided to bring an animal to the Spring Show. It was an excellent decision because Chaluka Festival Arabie came home with the red ribbon having won her Junior 3 Year Old class. Having well understood the principle that when you buy, you must sell. Therefore, in 2011 they consigned Chaluka Harmony Kazeni, a Junior Yearling from an EX 91 4E. She was purchased by Americans who did not hesitate to pay the highest price of the sale that year. They had reason to believe in her potential because that same year she was All-American and All-Canadian. This year, the Chaluka breeding distinguished itself among others with Chaluka Raven Vanille who was Tout-Québec Junior Yearling and nominated All-Canadian. This April calf was also Champion of the colored breeds at the Toronto Kubota Classic in November, and was admired throughout the summer at various exhibitions. They have a few projects for the future, such as renovating the milking parlor and the milking system. They never hesitate to purchase good animals, because they know that other breeders will not let good animals go. Jean-Philippe will become one of the major shareholders in a few years, and we wish him a future as promising as the past has been. On behalf or the entire Ayrshire Canada team, congratulations for your good work.