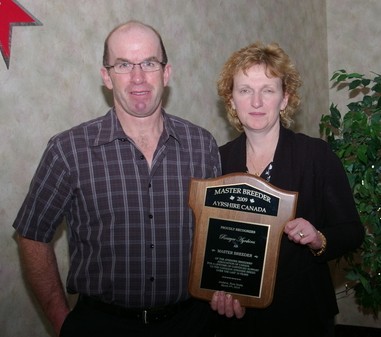 In the Ayrshire breed, the “Rosayre” herd is well-known internationally for its Champions as well as its champion producers. Therefore, it’s no surprise to see Ken and Shirley Rose of Mountain in Ontario being awarded the title of Master Breeder. Ken and Shirley acquired the family farm in 1994. Ken is the 6th generation on the farm and the 2nd with Ayrshires. In 1997, only 3 years after the acquisition, fire destroyed the buildings and most of the “Rosayre” herd, some 15 dry cows and heifers survived. Ken and Shirley rolled up their sleeves and began rebuilding the herd. With their expert eyes and exceptional talent in breeding, the Roses obtained remarkable results since that ordeal. Today, the herd consists of 120 head with 45 in milk. The herd average in 2009 was of 10,849kg at 4.1% fat and 3.3% protein for a BCA of 295-292-298. Classification shows 7 EX, 32 VG and 14 GP. Ken and Shirley cultivate 300 acres, mainly in corn, soy and oats. Over the years, successes multiplied, in the show ring as well as very high production. Here are a few cows that left their mark in the herd: Rosayre BB Riesling VG-89, Grand Champion at the Royal in 2004 and Intermediate Champion in 2003. Her sister, Rosayre BB Rebel VG-89 was Reserve Intermediate Champion at the Royal in 2009. Cows such as Rosayre BB Babs, Rosayre Garth Lust and Rosayre BB Jannah and Rosayre heligo Jangles obtained many high production certificates for 13,000 to 16,000kg of milk. Ken and Shirley sold a lot of embryos from their best cows, notably in Finland. They also never hesitate to consign quality animals at Ayrshire sales. In 2009, Rosayre Poker Mercedes obtained the best price at the Elite Sale in St-Hyacinthe. They’re always pleased to welcome visitors at the farm. Purchases like Rainbow’s End Regan, Sunny Acres Maria and Glen Elm Finale have helped the Roses to rebuild a herd of high caliber. Ken likes powerful cows, with good stature, good feet and legs and solid udders that produce a great quantity of milk. He always looks for this combination in his crossbreeding. Ken has also been a member of the Breed Improvement Committee for many years. He is a well-known and appreciated judge, having judged at all major exhibitions in Canada and also in Finland. Receiving the Master Breeder award, Ken follows in his father’s footsteps; Donald had also been awarded the same title in the past. Sincere congratulations to Ken and Shirley Rose of Rosayre Farm for the title of Master Breeder.