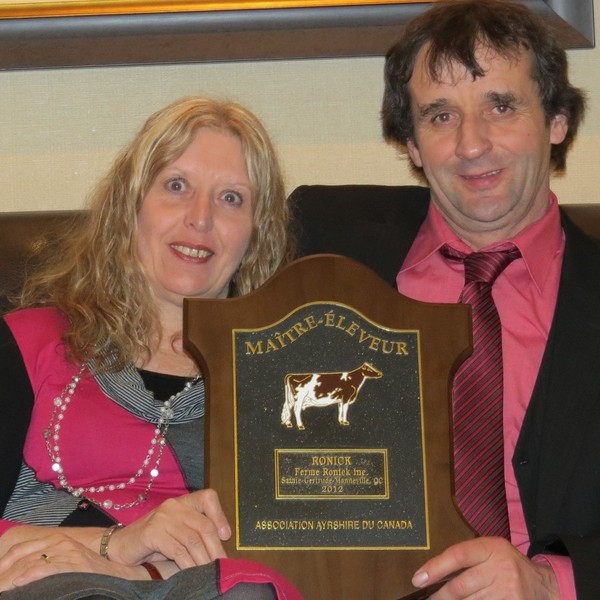 What a nice surprise it was for the owners of the Ferme Ronick Farm to find out that they were receiving the Master Breeder Award. They were not expecting such great news to start off their year! Rock Audet and Nicole Lachance are operating, with their daughter Geneviève, the Ronick Ayrshire Herd in Ste-Gertrude, located in the Abitibi region of Québec. Nicole and Rock acquired the farm in 1979. At that time, the herd consisted of about forty crossbred animals – Holstein and Ayrshire – with an average milk yield per cow of 4,869 kg. Nicole and Rock then decided to opt exclusively for the Ayrshire breed and to buy purebred animals from a good herd, the Clercs de St-Viateur’s Herd. At the moment of purchase, the farm covered 450 acres, of which 133 were cultivated, and the milk quota was 10.4 kg/day. Nowadays, the Farm owns 800 acres, of which 274 are cultivated and 40 are rented out, and the milk quota is 44 kg/day. Since 1979, the farm buildings have been significantly improved and new structures have also been erected. 2011 was a very important year in the history of the farm, as Geneviève became the 4th generation in the Audet Family to work on the farm when she became a 50% shareholder. Their son Jean-Philippe studies in welding & assembly, and he gives a hand on the farm during the summer and on week-ends. Karl Belzile, Geneviève’s partner, also assists with the work, mostly in the summer. Currently, the herd consists of 90 animals, of which 50 are cows and the remainder, heifers. The average milk production is 9,016 kg, with 4.15% fat and 3.29% protein, for a BCA of 258-256-257. Classification started in 1980 and, today, they count 20 VG, 23 GP, and 5 G. For their breeding program, the owners of the Ferme Ronick Farm rely greatly on PROGEN. They use the best proven sires and about 30% of their inseminations are realized with young sires from the PEP Program. Here are some of the animals who, through their great successes, contributed to making the owners worthy of this honour. Ronick Wilton Sierra GV-87 3* is an exceptional producer with 61,871 kg of milk in 5 lactations. Sierra is the dam of Ronick Simbad, an increasingly popular sire in the breed who is the son of Margot Calimero, property of Alliance Semex. Simbad is considered as one of the best sires to improve the mammary system and conformation in general; he also offers quite an acceptable proof with regards to production. Ronick Heligo Pansy EX-2E 1* is another cow who provided many points due to her very good longevity. This daughter of Bonnie Brae Heligo produced 88,232 kg of milk in 10 lactations. Ronick Heligo Sophia VG-85 1*, Ronick Pardner VG-87, and Sierra’s dam, Ronick Cornelius Sandy VG-85 2*, are some of the other cows who were important to the breeding of the herd. At Ferme Ronick Farm, people are dedicated to the quality of the breed and the owners promote it in an outstanding manner. Indeed, a few years ago, they started selling Ayrshire animals to several producers across their region, often to young ones who were starting up in the dairy production. This way, they contribute to making their herd known but, also, to making the Ayrshire breed known. We congratulate them for this wonderful initiative and we encourage them to continue with it. Nicole and Rock are very active in their agricultural and local communities, and they were honoured to receive a tribute prize from their regional agricultural Society, awarded for their respective involvements. The Audet-Lachance couple explains that receiving the Master Breeder Award is the crowning achievement of 33 years of work to create an exceptional herd and also that they are sharing this great honour with their family. In the future, Rock, Nicole, and Geneviève wish to improve the crop yield in their fields and continue to improve their herd’s genetics and production. In addition, they would love to attend more agricultural fairs and be more involved in the various Ayrshire breed committees. Participating to the “Mérite agricole” Contest is also part of their projects. With the next generation taking over, Nicole and Rock are planning to enjoy in a few years a well-deserved retirement to travel and, ideally, be surrounded by many grand-children. Ayrshire Canada wishes to offer its most sincere congratulations to the Ferme Ronick Farm for its Master Breed Award.