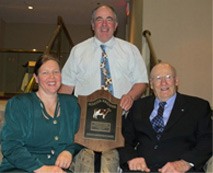 Terrace Bank Farm was founded in 1920 by J Earle Ness in Howick, Quebec. From father to son Robert and then to the next generation, Larry with his wife Cecile, this is the fourth Master Breeder award for the Farm. The second, third and fourth generations of Ness’ are involved in the farm at present and everyone has bred owned and purchased animals that contributed to this award. A true family affair, opinions and ideas are shared and come from all involved. The herd has 63 cows in lactation with a 2011 herd average of 8103 kg milk on 59 Ayrshire records. The herd classification is 8 EX, 32 VG and 33 GP. There are 5 main cow families in the herd that contributed the majority of points to this award. One is the Mist family that started in 1944 when J Earle Ness purchased Riverhurst Belle.  There are now 13 generations of VG or EX animals in this pedigree. The prominent cow families started from some great females that were purchased and have bred well. Artifact Haven J Cindy, Sous L’ombre Star Olga, Forever Schoon Wanda and Blackaddar Emily 2 are some of the building blocks that today’s herd has come from. Terrace Bank Cherry ET, a family favorite show cow and her progeny contribute the most points to the award. Marketing animals both buying and selling is a fundamental part of the Terrace Bank philosophy. Larry is proud of the fact that several animals have been sold out of the herd and have done very well for their new owners. Embryo transfer has been used extensively on the farm and all genetic improvement tools, such as milk recording and AI, were embraced as soon as they became available. Showing cattle and marketing Ayrshires are a large part of the business. Either Bob , Larry or both with different members of their families have participated in all the World Ayrshire Conferences except Kenya and attend as many Ayrshire events as possible. This fourth Master Breeder award means as much as the first, it shows that the cattle they breed last and perform well whether in the Terrace Bank herd or for others. The future plans for the farm are to keep improving the herd and to continue breeding profitable Ayrshire cows and introducing others to the breed.