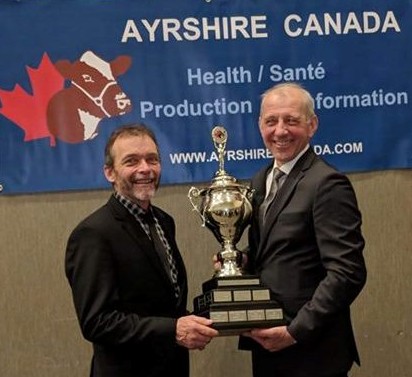 Our Association is pleased once again to honour one of its long-time distinguished members. Born into the Ayrshire world, this person grew up breathing “Ayrshire”. This breeder is such a passionate fan of his breed that he even went on to marry the daughter of another proud Ayrshire breeder.

In spite of his multiple commitments, such as sitting on various breed committees among others, he has always found time to participate, year after year, to numerous exhibitions, where his many successes have brought much glory to the prefix Des Prairies. And, in his spare time, to relax, he has also been chairing for many years the Board of a mutual insurance company, specializing in agricultural insurance services, which also takes him away from his farm for several days every year.

His expertise and his knowledge of the breed have long been internationally recognized. Over the years, he has evaluated and judged so many animals across not only Canada but the world that he, himself, probably wouldn’t know how many. In the last year alone, his services were requested in both Sweden and New Zealand.

While Ayrshire Canada President in 2015-16, he tackled, along with our General Manager, the arduous task of re-writing the bylaws. Sitting on the Board of World Ayrshire Federation, his people skills and – it is fair to say – his passion have both helped him contribute to the advancement of the breed vision, among others through the review of the registration rules. In short, he always gets the job done. Regardless of the task at hand, he always strives for perfection, all this while showing great respect for each and every one.

It is thus with tremendous pride that the Ayrshire Breeders’ Association of Canada, supported by all of the international breeders, is recognizing today the exceptional qualities of a great Ayrshire breed champion by presenting the 2018 Award of Merit to Mr. François Beaudry.