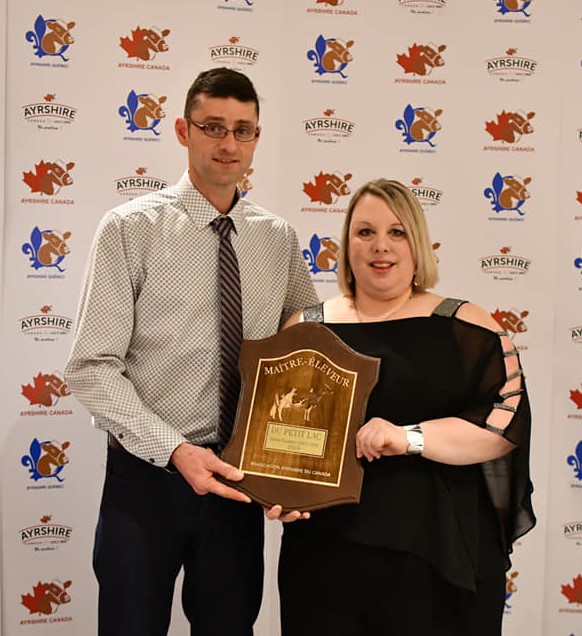 Over the years, Du Petit Lac has undergone some changes. Initially, the herd was housed on the Rousseau family farm, located in Lingwick. In 1995, Frédéric joined his parents in the business, who transferred their shares to him in 2005. That same year, the lactating cows were moved to Compton, and Frédéric became a partner of Ferme Coubert, which had been operated until then by Caroline, his partner, and her parents André and Nicole Couture. And that was the start of the mixed herd (Holstein and Ayrshire) that we know today. The heifers aged 6 months at first calving were kept at the Lingwick farm, partly under the responsibility of Jean-François, the youngest of the Rousseau family. Then, in 2015, the construction of a heifer barn brought the whole herd back to the same place. Currently, the business is operated by Frédéric and Caroline, as well as Caroline’s parents, who are in the process of retiring from the business, and the transfer process is underway.

For our herd, we want balanced cows with good mammary systems and the capacity to produce a lot of milk. Longevity is also an important factor on which we rely.

It is this philosophy that led to the evolution of the cow families that contributed most to this title of Master-Breeder. We find, among others, Du Petit Lac Wilton Kenyta EX-90-6E 1* and her descendants who combine strong production and sustainable conformation, Du Petit Lac Sylvester Moka VG-87 2 *, whose descendants show an exceptional conformation, which is passed on from generation to generation, and last but not least Du Petit Lac Sylvester Hamende EX-95-2E 4*, which contributed to the herd’s reputation.

It is with great joy and pride that we receive this second title of Master Breeder, which represents for us a source of motivation. For the future, we wish to continue to breed quality Ayrshires adapted to the needs of the market and in line with the company’s breeding objectives.