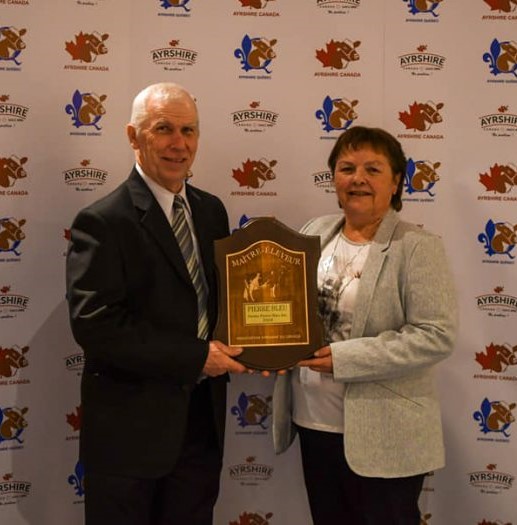 The history of the Pierre Bleu farm began on February 1, 1990, with 12 cows for a quota of 8.5 kg. In 1993, Solange joined Pierre as a partner of the farm. Éric, having graduated from Cégep Lévis-Lauzon’s agricultural business management program in 2011, worked for another dairy producer to acquire new experience. He then joined the farm in 2014, and purchased company shares in 2018.

The farm has always focused on business development by regularly purchasing quotas in order to grow the herd. In 2004, the barn was extended to provide free-stall housing to heifers and dry cows. At the same time, the manure pit was constructed. In 2018, a feed room with a vertical mixer was added to improve cow production.

Production levels are at 8509 kg with 4.24% fat and 3.53% protein for a BCA of 242-235-252. The classification of the herd is as follows: 3 EX 3E, 1 EX, 23 VG and 19 GP. Over the years, the farm has frequently purchased animals from families that have stood out in the Ayrshire breed.
To improve genetics, the farm went ahead with embryo transplantation on its best animals.

For Pierre, Solange and Éric Bilodeau, winning the title of Master Breeder is a source of great pride and represents a tremendous success. They are committed to continuing to improve the productionof their cows, while maintaining the good conformation standard that is representative of the breed, so that their animals will continue to be healthy and stay with the herd for as long as possible.