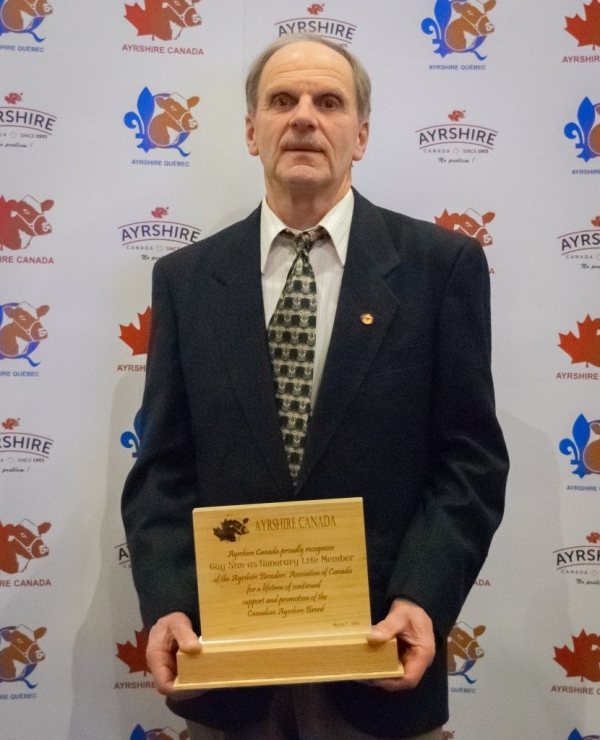 The story starts in 1912 when Guy Sim’s grandparents George and Mabel Loban immigrated to Canada and settled in the Comox Valley, where they purchased a farm. In 1920, they sold that farm and purchased the present farm, Birkdale Farm, where they milked Jerseys. In 1946, Alex Sim married Sybil Loban and, in 1950, they bought Birkdale Farm from Sybil’s parents, George and Mabel. Alex Sim liked Ayrshires so he began the process of switching to Ayrshires. He bought his first ones from Charles Dawson of Dawsondale Ayrshires in Nanoose Bay, BC.

After high school, Guy attended Olds College, worked away from the farm, and travelled Europe, visiting quite a few Ayrshire herds on his way. In 1970, Guy and his father, Alex, entered into a partnership to run the farm.

Over the years, he acquired other animals, buying two cows that would become the brood cows for the herd: The first one was Fintry Last Girl, so named because she was the last registered Ayrshire from a well-known Fintry herd of Capt. Dunwaters, producing the Michelle, Nedra, Merry, Nicole, Naomi, and Natasha bloodlines, and later Haughlands Comfort, producing the Countess and Fraulein bloodlines. Out of these bloodlines also came many bulls, and many of them have gone on to be top proven sires. Birghdale Nick became the top fat bull of his time. Other notable bulls include Birghdale Copper and Birghdale Tradition. His herd has also been in the top ten for production in Canada many times over the years and his cows have won many lifetime production awards.

Guy Sim’s herd is a 100% Ayrshire and he is a longtime member of Ayrshire Canada. At the Ayrshire World Conference in Kenya, he was one of three Young Ayrshire Enthusiasts to make a presentation. He has served as Director on the Board of Ayshire Canada and was president in 1993, holding the Annual Meeting in Comox, on Vancouver Island, in 1994. He is also a member of the Breed Improvement Committee for many years and supported the Royal Winter Fair’s Ayrshire Junior Calf Class.