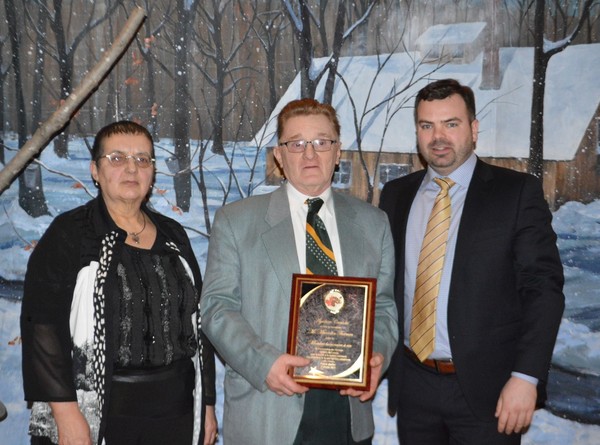 Marcellin was born on his grand-father Therrien’s farm, in St-Christophe d’Arthabaska. At the age of 20, Marcellin started taking part in the decision-making process of the farm and the herd. It was in 1968 that pure-bred Ayrshire cows first appeared within the Étoile D’Or herd. And, a few years later, Marcellin met someone very interesting, a young lady who cracked him a beautiful smile… and, in 1972, he married Louisette Boudreault. The stork brought them 2 children, Danny and Manon. That same year (1972), Marcellin’s father, Maurice, transferred over 50% of the business. A few years later, in 1980, Louisette acquired the other 50% from Maurice.

At a very young age, Marcellin got involved as a Director of the Bois-Francs Ayrshire Club. He later became President of this Club, for 4 years, and acted as Director at Ayrshire Québec. He also represented Ayrshire Québec at the Conseil Québécois des Races Laitières. He then became involved with the St-Hyacinthe’s IA Centre, the CIAQ, as Director. In 1997, he was nominated Director at Ayrshire Canada, and was President in 2000, 2006, and 2007. As if he were not busy enough, Marcellin also got involved in several other organisations and a few other committees.

Shows were another major part of his life. He shared his passion with other producers throughout the years at various exhibitions: Victoriaville, Trois-Rivières, Québec, International Dairy Showcase, Toronto Royal Winter Fair, and Madison, Wisconsin. One of his greatest successes was Étoile D’Or Bil Cartouche 3, a cow who left her mark within the herd. She was classed 1st at shows 21 times, won Grand Champion or Reserve Champion 10 times, and was nominated All-Québec, All-Canadian, and All-American. Marcellin also very much loved judging at several shows throughout the entire province of Québec.

It is thanks to his passion, his intelligence, his sustained hard work, and, above all, his wife who stayed behind to milk the cows every single time he was otherwise involved elsewhere that their Ayrshire herd was awarded the Hammond Trophy, for Best BCA Herd Average in Canada, in 1979 and 1989, in addition to the Master Breeder Award it received from Ayrshire Canada in 1998.

In 1999, Marcellin and Louisette made the difficult decision of selling their herd, as there was no one to take over. In the fall of ’99, many buyers showed up to each buy a part of the Étoile D’Or Herd’s genetics. This was a very emotional day…. From 1999 to 2007, Marcellin continued to breed Ayrshire heifers, his own personal way of grieving, if I may say.

At the end of 1999 – surprise! -, I decided to take over the family farm. Disappointment or panic? I don’t know. Announcing to a renowned producer that, I, his daughter, would rather be an ovine producer rather than a dairy producer was very tough. But learning that his daughter wanted to raise sheep was certainly not as bad as if I had told him that I wanted to continue producing milk with Holsteins… I think I would have died right then, or would have been completely disowned!

In 2002, a large sheep farm was built, with a capacity to raise 900 sheep for their meat. Marcellin still plays an active role in the decision-making process, along with my spouse and I. He continues to share with us his passion for agriculture.

Finally, Marcellin contributed in his own way to promote the qualities of the Ayrshire breed, to demonstrate the breed’s profitability, and to improve HIS BREED. On his behalf, I would like to thank all the people who helped him achieve his objectives. He loved his work and, most importantly, he loved working with other breeders towards the advancement of the Ayrshire breed. He thanks you for it.