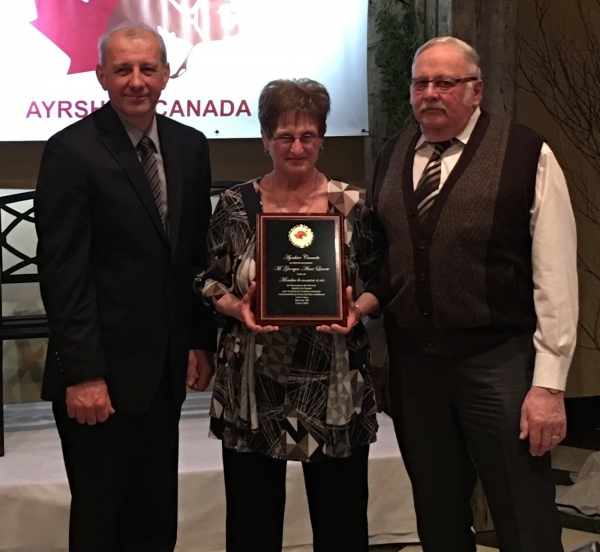 Georges-Aimé was born in 1943 on the family farm where he grew up, the Ferme République located in Saint-Basile, NB. The oldest of a family of 8 children, he actively took part in the farm work throughout his childhood. Following his studies at the village’s Agricultural School, he entered the work market, as his father could still count on the help of his 5 younger brothers at the farm.

In 1967, Georges-Aimé married Céline Clavette, a young lady from Rivière-Verte. Their son, Mario, was born two years later, and Lyne and Sylvain followed soon after. It is in 1980, exactly 100 years after the founding of the farming business by his grandfather, that Georges-Aimé decided to leave his job of 15 years at Fraser Paper, a pulp and paper mill located in Madawaska, Maine, to return home. His love of the land and the animals was – and still is – much alive.  With his wife, he undertook the continuity of the family farm.

Initially, he focused on improving the infrastructures and the machinery to accelerate the business growth. He decided to build a new barn in 1981, one that was considered state-of-the-art at that time. To deal with the challenge that such a significant investment represented, he chose to increase the milk production per cow and buy additional quota. To achieve this, he improved the herd’s feeding and reproduction, and opted for milk recording.

Beside his numerous daily chores, Georges-Aimé loved to participate every year in the Madawaska Regional Show. As part of this event, the Lavoie were named “Farm Family of the Year” in 1982 and in 1995. He also took part, on several occasions, to the Provincial Show in Fredericton, the Charlottetown Show in PEI, the Rimouski Show, the Québec Show, the St-Hyacinthe Spring Show, the Royal Winter Fair in Toronto, and the World Dairy Fair in Madison, Wisconsin.

Georges-Aimé also had at heart to improve the quality of his herd. In 1985, he was awarded a distinctive honour, the Best Herd Average across all breeds in New Brunswick. He received, as well, an award for Most Improved medium-sized herd in New Brunswick. He also won, from the New Brunswick Milk Marketing Board, the prize for Highest Composite BCA (30-49 heads). And, in 1988, the Farm won the Best National Average of kilograms of milk per cow per year in the Ayrshire breed, with an average of 8,059 kg and a composite BCA of 228.

To be more economically efficient, he installed, in 1990, a computerized feed grain distribution system as well two silos to store the grain. In 1994, changes were also made to allow the distribution of round hay bales inside the barn.

After 30 years of devoted work, Georges-Aimé decided to hand down the business to his son, Mario. Thus, in 2009, Mario took over the family farm and, consequently, became the fourth consecutive generation to own it.

In 2010, at the New Brunswick Dairy Producers’ Annual Meeting event, the Ferme République received an award for their milk quality. On the national level, they also received, in 2012, the Master Breeder Award from the Ayrshire Breeders’ Association of Canada, a great source of pride for Georges-Aimé, Céline, and Mario.

In conclusion, Georges-Aimé spent a good part of his life working with the Ayrshire breed, with much pride and compassion. These days, he is still very active on the farm, feeding the calves, caring for the animals, driving the tractor, and helping during the harvest season or with field work, among others. Georges-Aimé is always available to give a hand to his son, Mario. The farm is part of him, and always will be.